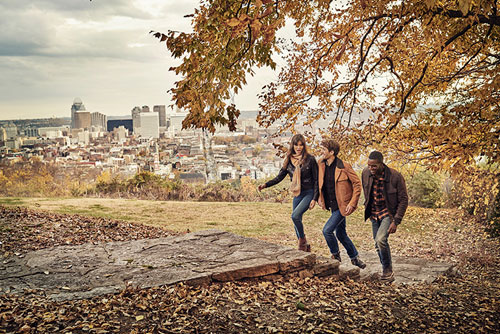 Actually, Nathan Swartz started it all in 1952 with the Abington Shoe Company in South Boston. His two sons, Sidney and Herman, joined him a few years later and relocated the company to Newmarket, New Hampshire. In 1973, Sidney introduced one of the first waterproof leather boots of its kind. Incorporating premium full-grain nubuck leather, thick rubber lug soles and unprecedented craftsmanship, the yellow boot was an instant classic. He named it the “Timberland.”

The yellow boot was made for hard working New Englanders, inspired by form and function, not trends and runways. Remaining true to that authenticity is just what appealed to people from all walks of life.
Eventually, it started selling in stores like Bloomingdales and Saks Fifth Avenue, which began a whole new era of the yellow boot: the boot as fashion.

The brand’s mission is to equip people to make a difference in their world, by creating outstanding products made for the modern trail.