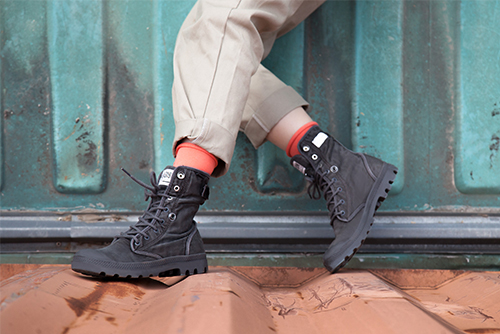 As a manufacturer of airplane tire starting in the 1920’s Palladium accompanied a generation of aviation pioneers who helped discover our world by conquering the skies.

After World War II Palladium was creating the Palladium pampa boot in 1947 and later the pallabrousse in 1949. Being a legionnaire meant walking, crawling, running and climbing, day and night. They were comfortable, they were resistant, and they made history as part of the uniform for one of the world’s most legendary forces.

Why Palladium more than any other brand? Because these boots are sturdy but light, water-resistant, and were the first ones made from canvas, the fastest fabric to dry out. If their design has become timeless, it’s because it responds to a fundamental need for resistance-resistance to the elements, to wear and tear, to time and trends.

For over 70 years, Palladium’s boots have been at the service of curious and independent individuals like volcano scientist Haroun Tazieff or music artist Pharrell Williams. Call them life explorers: open-minded individuals who have the desire to discover and leave a mark on our world. Decades of supporting life explorers has taught us that the good life doesn’t just happen—we have to chase it, to build it, to create it for ourselves.